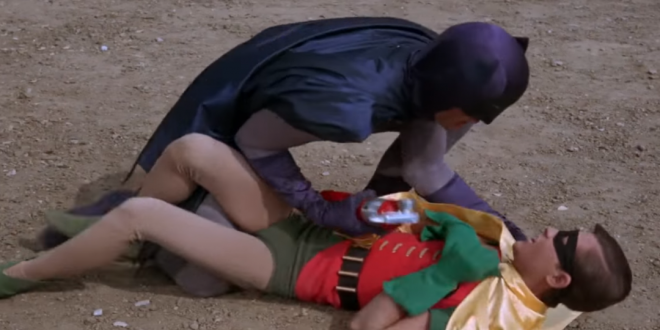 For baby boomers and classic TV fans, the name Burt Ward is instantly recognizable as the loyal and extremely excitable Robin on the campy “Batman” series which ran on ABC from 1966-1968. Just this week he happily unveiled a star on the Hollywood Walk of Fame which he called an “amazing experience.”

The Caped Crusaders costumes were bright and tight-fitting to say the least, so snug that Ward incurred the wrath of the Catholic League of Decency. “They thought that Robin had a very large bulge for television,” Ward told Page Six, although he promises that it was all him, unlike Adam West who played Batman.

Apparently ABC was so concerned about the enormity of the problem that the company took matters into its own hands. According to Ward, he was put on medicine from a studio doctor that would, in his words, “shrink me up.”

“I took them for three days and then I decided that they can probably keep me from having children,” Ward said. “I stopped doing that and I just used my cape to cover it.”

It’s worth noting that this isn’t the first time Ward has gleefully recounted the difficulties the production of Batman had with his anatomy. In his own autobiography, he details a number of methods undertaken by the production other than direct medical intervention to get his super crotch under control.

Ward and his wife now run a dog rescue charity. He claims to Page Six to have created a dog food brand, Gentle Giants, that “doubles and triples the lifespan of dogs.”