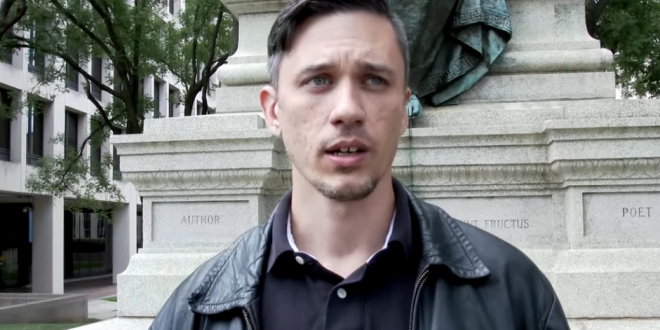 “Alt-right” figure Augustus Sol Invictus was denied bond Thursday for charges of kidnapping, domestic violence and possession of a weapon during a crime of violence. Invictus, born Austin Mitchell Gillespie, has lingered on the margins of the modern radical right for years, using its growing visibility to preach his own violent, misogynistic and totalitarian worldview.

In 2017, he attached himself to the rising alt-right movement, appearing as a planned headline speaker at the deadly “Unite the Right” rally in Charlottesville, Virginia, and collaborating with white nationalist leader Richard Spencer on an alt-right “manifesto.”

Last month, a woman who said she was Invictus’ wife reported that he held her at gunpoint in front of their children and forced her to accompany him to Jacksonville, Florida, according to documents obtained from the Rock Hill Police Department in South Carolina. She told police that she was able to escape while in Florida and return to South Carolina.

Invictus claims to be running for president on a platform of banning women from voting or owning property. He seeks to create a white ethnostate and denies the Holocaust.

Augustus Sol Invictus/Austin Gillespie, a eugenicist and Holocaust denier, announces a run for president “in honor of the two-year anniversary” of UTR. He ran for Senate in FL in 2016 against Marco Rubio. He has not actually filed to run for president, per FEC. pic.twitter.com/K1F09nl4ZD