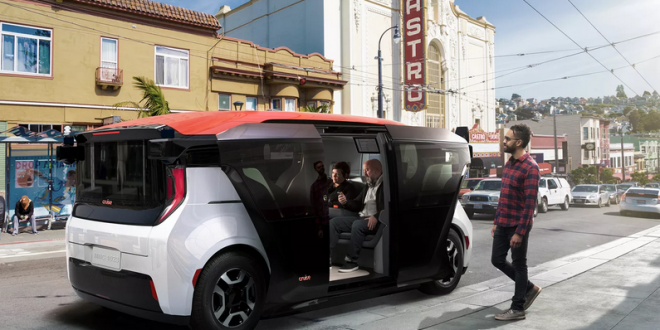 Cruise unveiled Tuesday evening a “production ready” driverless vehicle called Origin, the product of a multi-year collaboration with parent company GM and investor Honda that is designed for a ride-sharing service.

The shuttle-like vehicle — branded with Cruise’s trademark orange and black colors — has no steering wheel or pedals and is designed to travel at highway speeds. The interior is roomy with seats that face each other, similar to what a traveler might find on some trains.

Each seat is meant to accommodate the needs of an individual with personal USB ports, CTO and co-founder Kyle Vogt noted during the presentation. Digital displays are located above, presumably to give travelers information about their rides.

The boxy Cruise Origin, co-developed with Honda, represents “the transportation system you’d build, if you could start from scratch,” according to Cruise CEO Dan Ammann, a former president of General Motors.

Yes, but: It’s not clear how Cruise — which scrubbed plans to launch a robo-taxi service in San Fransisco in 2019 — would turn that vision into reality, much less a viable business.

Pressed for details later, Ammann said Cruise would scale up a ride-sharing business by offering “a better experience at a lower price than what you pay to get around today.”

Kyle Vogt, the co-founder and chief technology officer of Cruise, is clearly excited to be showing it off. With a broad smile, he reaches out and touches a button on the side, causing the doors to slide open with a little whoosh like something out of Star Wars.

Approximately 18 minutes later, after a brief tour of the vehicle and back-and-forth about the company’s grand plans for the Origin, Vogt says something bolder.

“By the time this vehicle goes into production, we think the core software that drives our AVs will be at a superhuman level of performance and safer than the average human driver,” he says. “And we’ll be providing hard empirical evidence to back up that claim before we put people in a car without someone in it.”