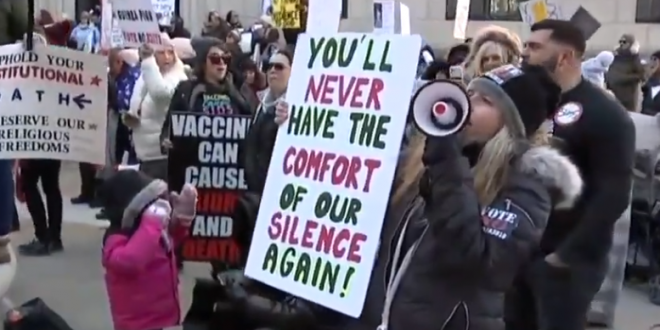 Religion will remain a valid excuse for children to bypass vaccination laws in New Jersey — at least for now — after state lawmakers Monday failed a second time to muster enough support to pass a controversial bill that would have repealed the option that thousands of the state’s families used last year.

With hundreds of parents once again staging a high-decibel protest outside the Statehouse in Trenton, a planned vote on the latest version of the legislation was called off because leaders in the state Senate fell one vote short on the last day of New Jersey’s two-year legislative session.

A bill to end religious exemptions for vaccinations in New Jersey schools collapsed after weeks of protests by vaccine skeptics https://t.co/NmlgNt39sd

The crowds in NJ are growing BY THE MINUTE!

TWITTER STORM! Please tweet these updated photos and tell them we are not backing down! #noS2173 #medicalfreedom #killthebill #occupytrenton pic.twitter.com/KKFF6dTIuR

The BATTLE OF TRENTON II. Yesterday history repeated itself as The Health Freedom Movement struck down S2173. The original battle in 1776 was a small victory but is credited with being a turning point for the revolution. #BeBrave #Winning #JerseyStrong https://t.co/X7A2SgZMjI

Yesterday was a historical win for medical freedom. New Jersey legislators tried to take away religious exemptions for vaccines for the second time, but 10 THOUSAND protesters showed up and killed the bill! I am so proud of New Jersey. #jerseystrong pic.twitter.com/CpsjvG0th2

Previous Booker: No Endorsement Yet, VP Slot Not Off The Table
Next Catholic Church Upset Over HBO’s Dancing Nuns