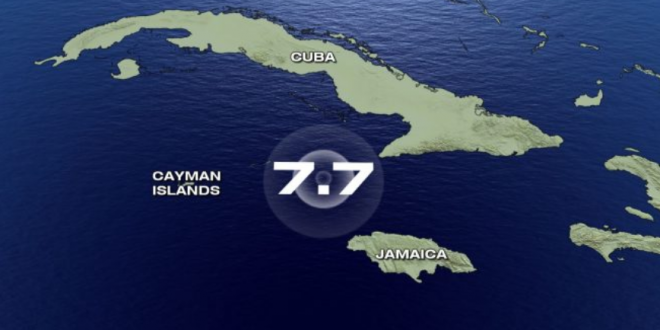 A powerful magnitude 7.7 earthquake has struck in the sea south of Cuba, triggering a tsunami warning for Cuba, Jamaica and the Cayman Islands. There were no immediate reports of damage or injuries, but tsunami warnings were quickly issued.

The quake also hit the Cayman Islands, leaving cracked roads and what appeared to be sewage spilling from cracked mains. “There were no immediate reports of deaths, injuries or more severe damage,” said Kevin Morales, editor-in-chief of the Cayman Compass newspaper.

The epicentre of the quake on Tuesday was 139km (86 miles) north-west of Montego Bay, Jamaica, and 140km (87 miles) west-south-west of Niquero, Cuba. It was a relatively shallow 10km (6 miles) beneath the surface.