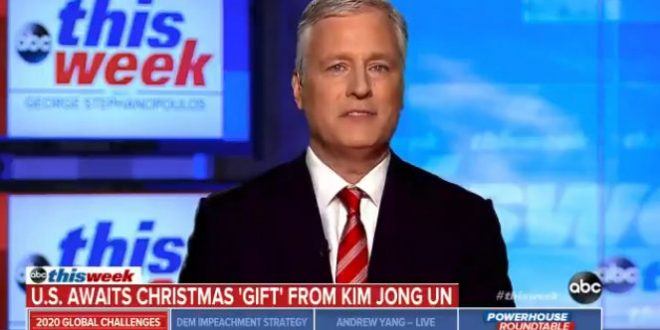 White House: US Would Respond To Any NK Missile

The United States would be very disappointed if North Korea tested a long-range or nuclear missile and would take appropriate action as a leading military and economic power, White House national security adviser Robert O’Brien said on Sunday.

Washington has many “tools in its tool kit” to respond to any such test, O’Brien said in an interview with ABC’s “This Week.”

“We’ll reserve judgment but the United States will take action as we do in these situations,” he said. “If Kim Jong Un takes that approach we’ll be extraordinarily disappointed and we’ll demonstrate that disappointment.”

#NorthKorea promised to deliver a “Christmas gift” to the U.S. which had officials on alert for a potential long-range missile test. #Trump national security adviser Robert O’Brien: “Perhaps (#KimJongUn) reconsidered that, but we’ll have to wait and see” pic.twitter.com/vC4YoXVHQp