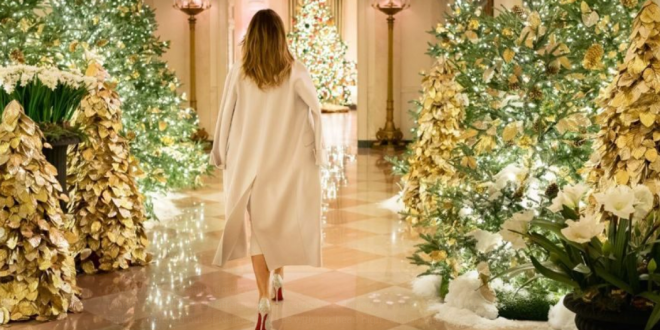 “If this was a Democratic administration, I suspect Mrs. Trump and her work would be featured positively in every mainstream news outlet,” said Grisham. Earlier on Tuesday, Sen. Marco Rubio (R-Fla.) also took aim at the press for its coverage of the White House’s big Christmas decor reveal, dubbing it “deranged criticism.”

“The Spirit of America” is shining in the @WhiteHouse! I am delighted to share this beautiful exhibit of patriotism for all to see, and excited for everyone to experience the beauty of the #Christmas season! pic.twitter.com/qGxxl9qBrd

Does anyone in the world of major media have enough self awareness to realize the damage their hatred of @realdonaldtrump is inflicting on them & journalism? pic.twitter.com/GRzmwUtoDo

Tonight on Dallas: even after her credit cards were denied, JR’s mistress, “Countess” Mitzi LaFleur, marched out of Neiman Marcus with her head high, declaring, “There are other rich, evil, elderly men in the world and I intend to marry them!” #Melania pic.twitter.com/dWjWwxxhaP