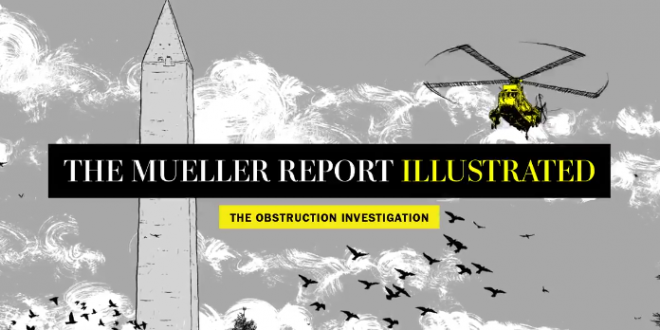 Written and designed by The Washington Post and illustrated by artist Jan Feindt, “The Mueller Report Illustrated: The Obstruction Investigation” brings to life the findings of special counsel Robert S. Mueller III in an engaging and illuminating presentation.

When it was released on April 18, Mueller’s report laid out two major conclusions: that Russia’s interference in the 2016 presidential election had been “sweeping and systematic,” and that the evidence did not establish that Trump or his campaign had conspired with the Kremlin. The special counsel left one significant question unanswered: whether the president broke the law by trying to block the probe.

The book and six-part digital series is drawn directly from episodes detailed in the Mueller report in which prosecutors found evidence of possible obstruction of justice, as well as congressional testimony and Washington Post reporting.

The Mueller Report Illustrated publishes today! Check out Chapter 1: ‘This Russia thing is far from over’ https://t.co/hX8S7qLMAI

Shortly after taking office, President Trump sensed the danger from the building Russia investigation — and moved to try to contain it.

The Mueller Report Illustrated, Chapter 1: “This Russia thing is far from over.” https://t.co/L7z3ndh81D pic.twitter.com/3FOGx7Y5Uw

“The Mueller Report Illustrated” is drawn directly from the Mueller report, as well as congressional testimony and Washington Post reporting.

Out today ➡️ The Mueller Report Illustrated: a six-part digital series and graphic nonfiction book that uses illustration, animation, and audio to bring the findings of the special counsel to life. Read it now at https://t.co/oF7HnTP89d pic.twitter.com/yg9z8Wnz3s