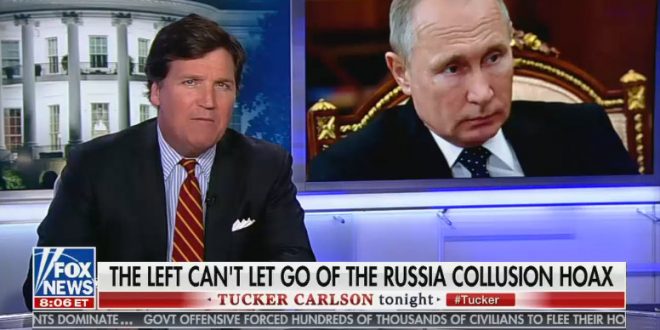 “If you excluded debunked conspiracy theories, could any of these people actually tell you why Vladimir Putin is so bad? Why is he so bad? He’s bad, Chuck Todd says. Okay, speak slowly so I can understand. What makes Vladimir Putin worse than, I don’t know, a whole long list of American allies? Let’s try the King of Saudi Arabia, for example, or the people who run the Emirates – the people on whose payroll so many in Washington are right now.

“Why is he worse than them? They couldn’t answer that. For Chuck Todd and the rest of the dummies, Vladimir Putin isn’t a real person with actual ideas and priorities and a country and beliefs. No, he stopped being that long ago. He’s a metaphor, a living metaphor, he’s the Boogeyman. Step out of line and you’re a traitor in league with Vladimir Putin, let’s put his picture on the screen. Can we get his picture on the screen?

“The irony, of course, is that Putin, for all his faults, does not hate America as much as many of these people do. They really dislike our country. And they call other people traitors? ‘Cause they’re mouthing the talking points of Putin? These are people who don’t know anything about Russia, who don’t speak Russian. Who couldn’t identify three cities in Russia. The rest of the world isn’t quite that dumb. – Tucker Carlson.