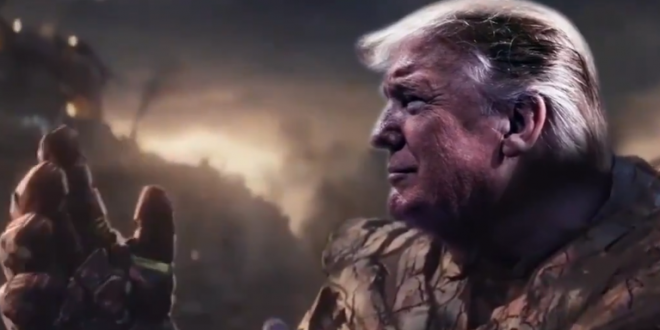 Thanos, for the unfamiliar, is the main antagonist of Avengers: Infinity War and Avengers: Endgame. His goal is to collect all of the Infinity Stones, because once he does he can snap his fingers and wipe out half the population of the entire universe.

In Infinity War, he actually wins and the movie ends with half of the heroes being wiped out. In Endgame, his fate is… well, the general fate of most comic book bad guys.

So you’re arguing that Trump is Thanos (“The Mad Titan”) who wants to kill half of all living things, but in the end winds up defeated and dying, taking all of his sycophantic followers down with him?

>Thanos is the fucking villain
>This is from the scene where Thanos FAILS
>The audio editing is really poor, they literally don’t even crossfade out the audio as they fade away
>This video implies trump will kill people

This is perhaps the absolute worst piece of propaganda ever

This is the part of the movie when Thanos discovers that he's been outsmarted, and he dies 2 minutes later. https://t.co/RqLBtADohi

The Trump campaign is now comparing the President to Thanos, the genocidal villain from The Avengers. This is bizarre. Even for them. (And they leave out the part where Thanos loses in the end) https://t.co/Cc4cWp1dbe