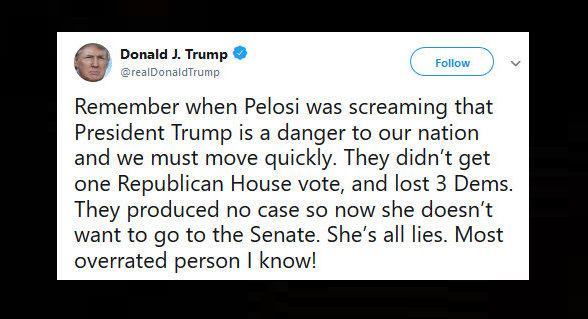 On the day before 2020, President Trump ripped into House Speaker Nancy Pelosi on Twitter, saying the California Democrat is “all lies” and “the most overrated person [he] knows.”

After Democrats ran the impeachment process in the House, Pelosi suggested she would wait to send the articles to the Senate until Republicans agree to terms set by Minority Leader Chuck Schumer.

The president has demanded an “immediate” trial in the Senate where he will be afforded defense attorneys and the ability to call witnesses.

Remember when Pelosi was screaming that President Trump is a danger to our nation and we must move quickly. They didn’t get one Republican House vote, and lost 3 Dems. They produced no case so now she doesn’t want to go to the Senate. She’s all lies. Most overrated person I know!