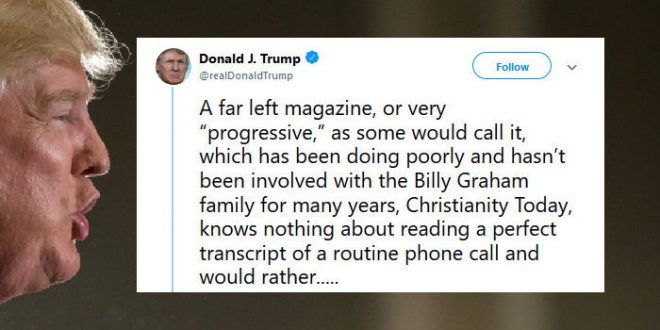 One of the nation’s top Christian magazine publications called for the removal of President Trump on Thursday, one day after the House of Representatives passed two articles of impeachment against him.

In an editorial titled “Trump Should Be Removed From Office,” Christianity Today editor-in-chief Mark Galli invoked the mission of the magazine’s founder, Billy Graham, to “help evangelical Christians interpret the news in a manner that reflects their faith.”

Galli recalled a CT piece written in 1998 during then-President Clinton’s impeachment, reading, “Unsavory dealings and immoral acts by the president and those close to him have rendered this administration morally unable to lead.”

Trump is lying about the magazine, of course.

It’s a mainstream religious title – hardly “far-left” – and there’s no news item I can find about its supposedly dire financial state.

A far left magazine, or very “progressive,” as some would call it, which has been doing poorly and hasn’t been involved with the Billy Graham family for many years, Christianity Today, knows nothing about reading a perfect transcript of a routine phone call and would rather…..

….have a Radical Left nonbeliever, who wants to take your religion & your guns, than Donald Trump as your President. No President has done more for the Evangelical community, and it’s not even close. You’ll not get anything from those Dems on stage. I won’t be reading ET again!