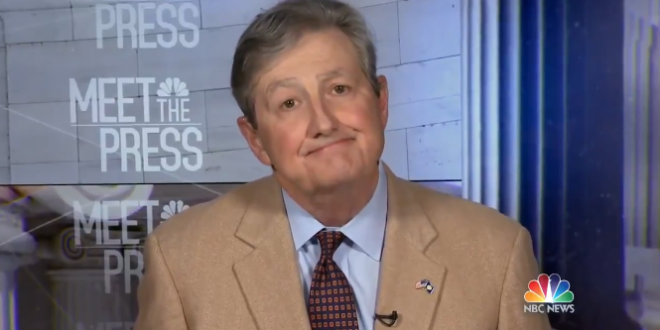 President Trump on Monday praised Sen. John Kennedy (R-La.) for his appearance a day earlier on NBC’s “Meet the Press,” where anchor Chuck Todd questioned the senator for pushing the unsubstantiated claim that Ukraine meddled in the 2016 election.

Kennedy has been part of controversial interviews each of the past two Sundays after making claims about Ukraine’s involvement in the 2016 election.

On “Meet the Press” on Sunday, Kennedy asserted that that the former Ukrainian president favored Clinton over Trump. The Intelligence Committee has concluded that Russia, not Ukraine, interfered in the 2016 election and was seeking to aid the Trump campaign.

Thank you to Great Republican @SenJohnKennedy for the job he did in representing both the Republican Party and myself against Sleepy Eyes Chuck Todd on Meet the Depressed!