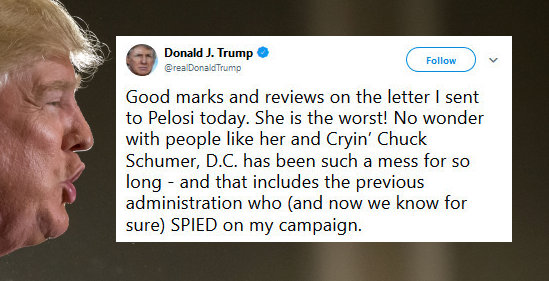 Trump: Everyone Loved My Crazy Letter To Pelosi

President Trump spent the evening before the House convenes for a historic impeachment vote the same way he’s spent many nights in the White House: glued to Twitter, cranking out angry missives about his enemies and retweeting favorable election polls.

Trump continued firing off defiant messages until after 11 p.m. on Tuesday, blasting Democratic leadership while insisting that he had no concern about potentially becoming the third president ever impeached.

Late on Tuesday, Trump tweeted that his unhinged letter to Pelosi had gotten “good marks,” while repeating unfounded claims that the Obama administration “SPIED on” his 2016 campaign.

Good marks and reviews on the letter I sent to Pelosi today. She is the worst! No wonder with people like her and Cryin’ Chuck Schumer, D.C. has been such a mess for so long – and that includes the previous administration who (and now we know for sure) SPIED on my campaign.

So, if Comey & the top people in the FBI were dirty cops and cheated on the FISA Court, wouldn’t all of these phony cases have to be overturned or dismissed? They went after me with the Fake Dossier, paid for by Crooked Hillary & the DNC, which they illegally presented to FISA…

….They want to Impeach me (I’m not worried!), and yet they were all breaking the law in so many ways. How can they do that and yet impeach a very successful (Economy Plus) President of the United States, who has done nothing wrong? These people are Crazy!

.@foxandfriends “My hope is that impeachment will never become this trivial again.” @kilmeade Well said Brian!

Can you believe that I will be impeached today by the Radical Left, Do Nothing Democrats, AND I DID NOTHING WRONG! A terrible Thing. Read the Transcripts. This should never happen to another President again. Say a PRAYER!