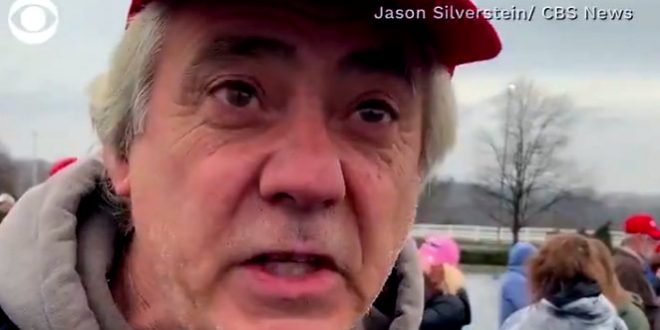 Trump Cultist Declares That His .357 Magnum Is Very Sure Trump Won’t Be Removed From Office [VIDEO]

Supporters of President Donald Trump implied that they could angrily take up arms and widespread violence rivaling the Civil War could break out if the president was removed in a Senate trial after being impeached by the House.

In a video taken by CBS News’ Jason Silverstein at Trump’s Hershey, PA rally on Tuesday, one man in a gray Trump shirt and a red MAGA hat leans in towards the camera and ominously repeats “He’s not gonna be removed” three times before saying “my .357 Magnum is comfortable with that” when an unseen reporter asked if he was sure of Trump’s job security.

The second man in the clip turns out to be an Infowars contributor, something he did not disclose to the CBS crew.

Trump supporters at the president’s rally in Hershey, Pennsylvania tell CBS News their thoughts on impeachment and the possibility of his removal: “It would become the second Civil War.” https://t.co/jPUmfWREbX pic.twitter.com/bzT0v9oaWN