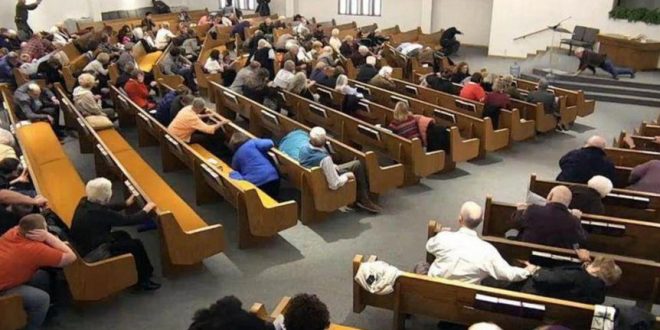 CNN aired footage on Monday morning from the moment when the gunman behind the West Freeway Church of Christ shooting pulled out his weapon and started attacking service attendees.

Two victims were killed in the attack outside of Fort Worth, TX on Sunday, and the gunman also died from return fire from the parishioners.

The violence was captured on the livestream from the church’s service, and CNN decided to air the moment when the gunman fired off his shotgun before another person shot him back.

SUNDAY SERVICE SHOOTING: At least two victims were killed and several others were injured during a violent attack at a crowded Texas church on Sunday. Officials said the gunman was also shot to death by two armed parishioners. @marcusmoore reports. https://t.co/lWAEkSbAhF pic.twitter.com/sJun6lFJz6

ours is the only country in the world where “only two people died in the church shooting” is considered a feel-good story. WHERE’S MY BIG FUCKING FOAM FINGER, WE’RE NUMBER ONE