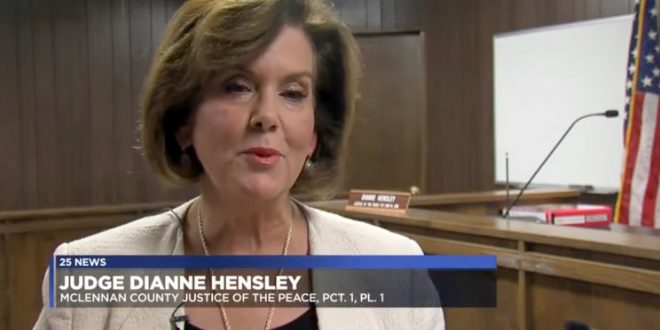 TEXAS: Judge Sues After Being Reprimanded For Not Performing “Offensive” Same-Sex Marriages [VIDEO]

McLennan County Justice of the Peace Dianne Hensley is suing the Texas agency that investigates judicial misconduct for issuing her a public warning earlier this month for refusing to perform same-sex marriages while continuing to marry [opposite sex] couples.

Hensley, backed by the First Liberty Institute, filed a class-action petition in Waco’s 170th State District Court Tuesday, claiming the disciplinary action against her by the State Commission on Judicial Conduct violates her rights under the Texas Religious Freedom Restoration Act.

In the clip below, Hensley says, “I have no desire to offend anybody but the last person I want to offend is God.”

Previous McConnell: I’m Not An Impartial Juror, This Is Political
Next Christian Consumer Group: Boycott Chick-Fil-A Because “LGBTQ Unicorns Have Vowed To Destroy Christianity”