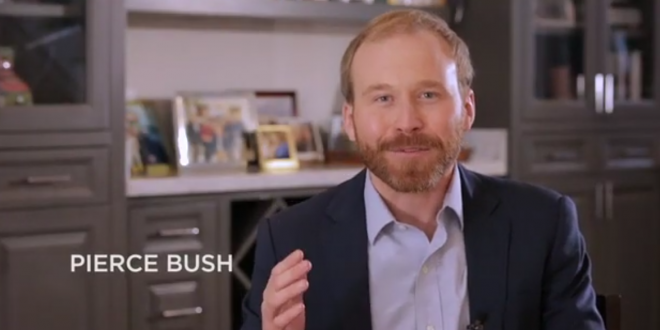 At least 14 other Republicans are running in the GOP primary for this suburban Houston district, which will likely also be a top Democratic target next year. In 2018, Olson won reelection by a 5% margin, his narrowest ever, as the district diversified and suburban women across the country fled the Republican party.

His candidacy opens a new test for the Bush name in the Trump era. Other Republican candidates in the field have expressed unwavering support for President Donald Trump, who has clashed with the Bush family that for decades defined the GOP establishment. George H.W Bush voted for Hillary Clinton in 2016, and President George W. Bush didn’t vote for either one of them.

The only Bush currently in public office, Texas Land Commissioner George P. Bush, broke with his family in 2016 and supported Trump. During a visit to Texas earlier this year, Trump introduced George P. Bush, who is the son of former Florida Gov. Jeb Bush, as “the only Bush that likes me.”

Pierce Bush, whose father is Neil Bush, has spent the past three years as chief executive of the nonprofit Big Brothers Big Sisters in Texas. He made no mention of Trump in his announcement video and launched his campaign website with only a short biography and no positions on issues or policies.

“Socialism and ‘free stuff’ has failed.”