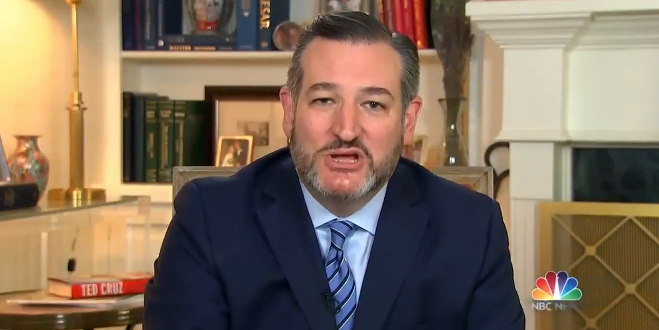 “I do. And I think there is considerable evidence,” Cruz replied. “You do?” Todd shot back, expressing shock. “You do?!”

The two would go back-and-forth over the evidence that the Ukraine government interfered in the election, with Cruz pointing to a 2016 op-ed by the Ukrainian ambassador criticizing Trump’s stance on Russian aggression against Ukraine as proof.

Sen. Ted Cruz (R-Texas) on Sunday dismissed the allegations House Democrats have made against President Trump and characterized the continuing impeachment inquiry as a baseless partisan attack. “This is a kangaroo court in the House,” Cruz said on NBC’s “Meet the Press.”

Host Chuck Todd responded, “That is exactly why the impeachment was written into the Constitution. That’s exactly why the phrase ‘high crimes and misdemeanors’ is in there because they did it before they even wrote our laws, sir.”

Previous Matt Gaetz: It’s “Weird” That Giuliani Went To Ukraine
Next Trump: Dems Are Impeaching Because They Hate Me