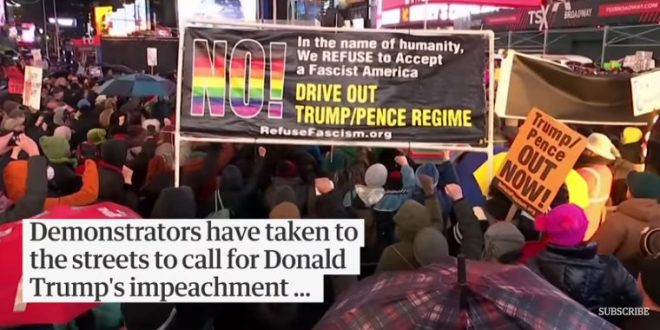 Hours before the House votes on whether to impeach President Donald Trump, hundreds of demonstrators gathered in Times Square Tuesday night chanting “Tell me who’s above the law? Nobody is above the law!”

They weren’t alone. Rallies sprang up from Oregon to Florida on the eve of the vote on two articles of impeachment against Trump, charging him with abuse of power and obstruction of justice.

In some places, those protesting in favor of impeachment were met with those against it. Shouts of “keep America great! Trump 2020!” could be heard from the opposite end of Bicentennial Plaza, where an impeachment rally was being held in Raleigh, North Carolina.