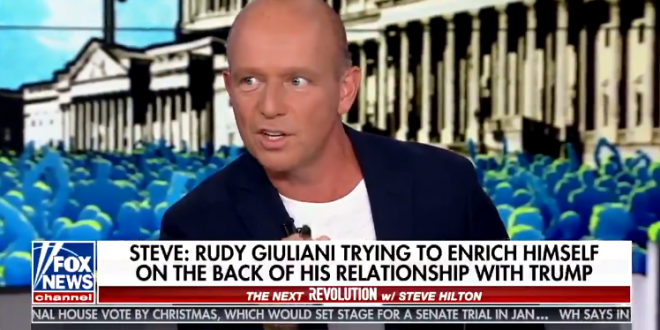 Rudy Giuliani suggested that he might sue Fox News host Steve Hilton for recommending that President Donald Trump fire him.

As Giuliani remains under scrutiny over his involvement in the effort to pressure the Ukrainian government into investigating Trump’s political foes, new reports have said that he pursued his own business deals in Ukraine.

Hilton addressed this on Sunday on Fox show The Next Revolution, where he called Giuliani an “unethical disaster” and a “grifter.” Calling out Fox News contributor John Solomon and others involved in the Ukraine story, Hilton also declared, “it’s time to dump these toxic chumps.”

I have not taken a penny for representing my friend, President Trump. I am outraged that @SteveHiltonx reported that I was trying to pursue private business deals in Ukraine to “enrich” myself, when in reality I have made ZERO in Ukraine! Very lazy reporting!

Since representing Trump I have considered and turned down all deals in Ukraine, even those not presenting a conflict.

Lawyers tell me @SteveHiltonx is a wild card and I should sue him for libel.

He recklessly disregarded the truth!

If it wasn’t for me, @SteveHiltonx wouldn’t even be covering Burisma. He sure didn’t cover it for the THREE YEARS it was in front of his face. He should apologize for his maliciousness and thank me for the story!