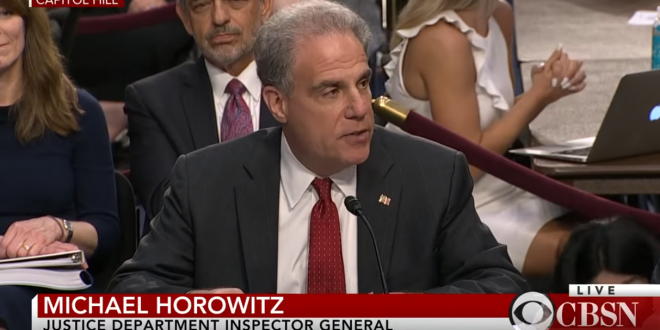 The Department of Justice’s internal watchdog on Monday released its long-awaited report on the FBI’s decision to investigate Russian interference in the 2016 presidential election, including its surveillance of a then-Trump campaign aide.

Inspector General Michael Horowitz found that there was a proper legal basis for the FBI to seek a surveillance warrant against Carter Page, a former foreign policy advisor to Trump’s campaign, according to the 476-page report.

Horowitz also reported that there was no evidence of political bias at the root of the investigation — rebuffing President Donald Trump’s repeated claims about a concerted effort to undermine his campaign being led by “deep state” Washington bureaucrats.

Sen. Richard Blumenthal (D-Conn.) said the inspector general had “completely demolished” some of conservatives’ assertions about the origins of the probe, though his investigators did find some problems.

“Clearly, there was a legitimate, factual basis; in fact the FBI had a moral imperative to begin this investigation,” Blumenthal said.

In particular, he said the inspector general had rebutted claims that Trump campaign advisers were illegally surveilled or entrapped, or that political motive was “in any way a factor.”

It’s important to remember that the IG report being a dud will not stop #QAnon supporters from believing that the NEXT batshit crazy theory will finally bring down the Deep State. They claimed the Nunes Memo would change everything. Then the FISA docs.