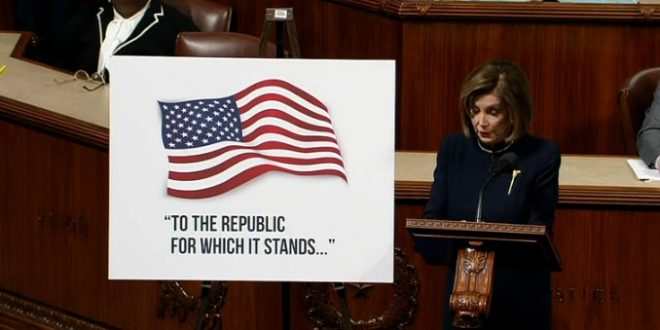 Pelosi Formally Opens Debate: He Gave Us No Choice

Speaker of the U.S. House of Representatives Nancy Pelosi opened debate on the articles of impeachment against President Donald Trump on Wednesday.

“I solemnly and sadly open the debate on impeachment of the president of the United States. If we do not act now, we would be derelict in our duties,” she said.

Ms. Pelosi took the floor on Wednesday dressed in a dark suit, a nod to what she has long said would be a solemn day, and a carefully-chosen accessory: a gold brooch fashioned as the Mace of the Republic, also known as the speaker’s mace.

“Our founder’s vision of a republic is under threat from actions from the White House,” she said somberly, adding, “If we do not act now, we would be derelict in our duty. It is tragic that the president’s reckless actions make impeachment necessary. He gave us no choice.”