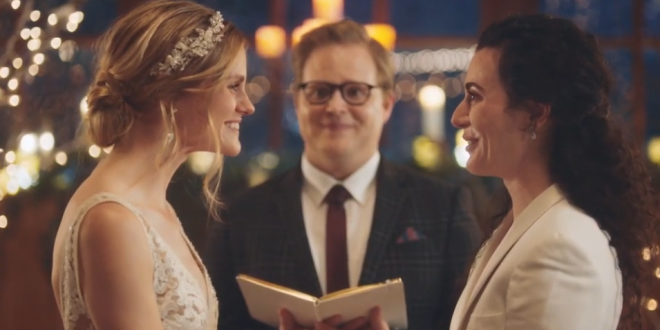 One Million Moms Vs The Hallmark Channel [VIDEO]

The Hallmark Channel has always been known for its family friendly movies. Even its commercials are usually safe for family viewing. But unfortunately, that is not the case anymore. Recently, One Million Moms received concerns about Hallmark airing a commercial from Zola.com in which two lesbians are shown kissing at the end of their wedding ceremony. Similar concerns from regular viewers are posted on an online complaint board for the Hallmark Channel.

Conservative viewers will be disappointed to learn that Hallmark has ideas of moving beyond airing only commercials with LGBT content and is open to producing LGBT movies in the future. Michelle Vicary, executive vice president of programming for Crown Media Family Networks – the company that makes Hallmark movies – recently said: “We are continuing to expand our diversity. We are looking at pitches for LGBT movies.”

Parents need to know they could now come face-to-face with the LGBT agenda when they sit down to watch the Hallmark Channel. Family entertainment is not the outlet in which to be politically correct by forcing tolerance and acceptance of homosexuality – a sinful lifestyle that Scripture clearly deems as wrong. You can read so in Romans 1:18-32.

One Million Moms is asking Hallmark to stay true to its family friendly roots that so many families have grown to love, and to keep sex and sexual content – including the promotion of homosexuality – out of its programming. Please sign our petition asking Hallmark to do what is right and reject airing movies and commercials with LGBT content!

The scripture cited above warns that God will smite the unrighteous. In other words, he’ll murder the fuck out of the Hallmark Channel, or something, if they dip a toe into pink waters.