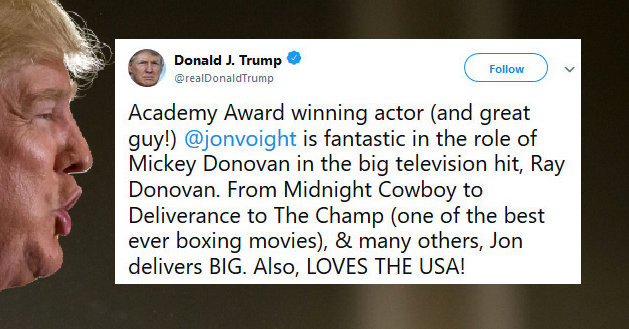 The president made the post just over a week after Voight released a bizarre video which insinuated Trump was mandated by God.

“There is a God. There is a truth. This left wing lacks truth and they’re afraid of Trump’s truth to save this country. Let us all stand with God, with President Trump, and ask the Holy light of God and Jesus for their prayers,” Voight proclaimed in his video.

Voight first appeared on JMG in 2009 for this:

“Barack Obama is taking away God’s first gift to man, our free will. And no man, no matter what his title, even if he’s the president of the United States, has the consent of God to say he’s God.”

Academy Award winning actor (and great guy!) @jonvoight is fantastic in the role of Mickey Donovan in the big television hit, Ray Donovan. From Midnight Cowboy to Deliverance to The Champ (one of the best ever boxing movies), & many others, Jon delivers BIG. Also, LOVES THE USA!

In God We Trust pic.twitter.com/xbMCTDhgp4