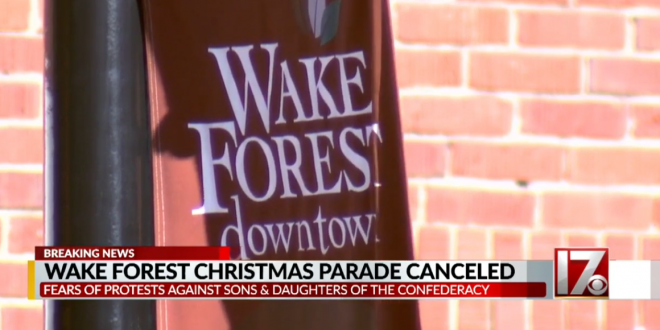 On Wednesday, Wake Forest became the second Wake County town in a week to cancel its Christmas parade over safety fears. Wake Forest officials canceled the parade for what is though to be the first time since it started more than 71 years ago. Town officials said they had received credible information that “extremist” groups on both sides of the issue of how — and whether — to preserve and interpret symbols of the Confederacy were making plans online to attend the parade.

Town officials said no one from either side made any threats, but the fear was that that dozens of people from the different groups would clash at the parade and that the situation could get out of hand. In the past, members of the Sons of Confederate Veterans and of the United Daughters of the Confederacy have participated in the Wake Forest Christmas Parade, without incident.

It would be great if Garner and Wake Forest could carry on with future Christmas parades without including divisive and hurtful symbols like the Confederate flag. pic.twitter.com/xeyZ1YlDT4