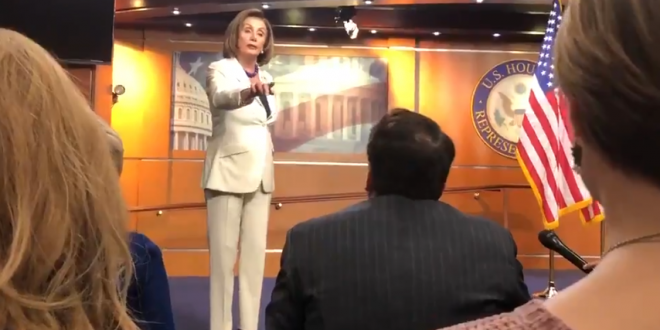 Nancy Pelosi Rips Head Off Right Wing Reporter: Don’t You Mess With Me When It Comes To “Hating” Trump

House speaker Nancy Pelosi was walking away from her podium to end her weekly press conference when a reporter shouted a question about whether Democrats “hate” the president.

Pelosi quickly turned on her heel to address the reporter directly, angrily telling him that she did not hate the president and that she resented him for using the word. “I don’t hate anyone,” the House speaker said, citing her Catholic upbringing. “I still pray for the president,” she added.

Pelosi threw a number of insults Trump’s way, calling the president a “coward” on gun violence, among other things. But she emphasized she did not hate the president. “So don’t mess with me when it comes to a word like that,” Pelosi told the reporter. And with that, she walked out.

The reporter is from the very right wing Sinclair Media, who has Trump’s ballsack in their mouth at all times.

Thermonuclear moment at the end of Pelosi’s press conference. She is walking off the dais. James Rosen of Sinclair asks “do you hate the President?” Pelosi shoots back “I don’t hate anybody!” Walks back to lectern & lectures Rosen.

Speaker Pelosi says she resents the use of the word hate in a sentence about her and says “don’t mess with me” when it comes to words like that after asked if she hates President Trump pic.twitter.com/UqTBSd84FK

A reporter asks Nancy Pelosi if she “hates the president.”

“I don’t hate anybody,” she says in a strong response. “As a Catholic, I resent your using the word hate in a sentence that addresses me…Don’t mess with me when it comes to words like that.” https://t.co/gw1UdPVuFp pic.twitter.com/UmPs57hKlZ

When asked by a reporter if she hates the president, Nancy Pelosi fires back saying, “I don’t hate anybody.” https://t.co/09vLJkZ7GP pic.twitter.com/9zXrckzDce

Wow. Pelosi takes umbrage at a reporter asking her, “do you hate the president?” as she walks away from the podium.

“I don’t hate anybody,” she says. “This is about the Constitution … as a Catholic, I resent you using the word ‘hate’ in a sentence that addresses me.” pic.twitter.com/sh5DpoccRS