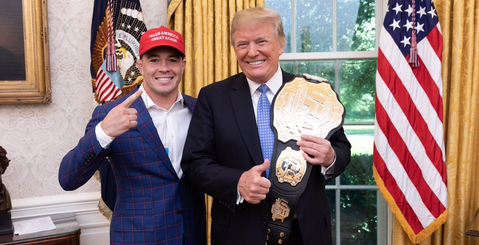 Colby Covington will go home without the UFC welterweight title and instead spent his Saturday night at the hospital receiving treatment following his fifth round TKO loss to Kamaru Usman.

Between the third and fourth rounds, Covington went to his corner and told his coaches that he believed he suffered a broken jaw.

A replay seemed to show a punch connecting from Usman that snapped Covington’s head around, which likely caused the damage.

ANTIFA will not be going after Bryce or @ColbyCovMMA anytime soon. They much prefer people who can’t fight back! https://t.co/s2M2RHkDsE

Here’s a video of two schmucks wishing a third schmuck luck before a fight.

Third schmuck then got his ass kicked and ran out of the arena.

President Trump on Colby Covington after his loss. “I don’t know him. Never heard of the guy.” #UFC245 pic.twitter.com/Wo8CWL6GSZ