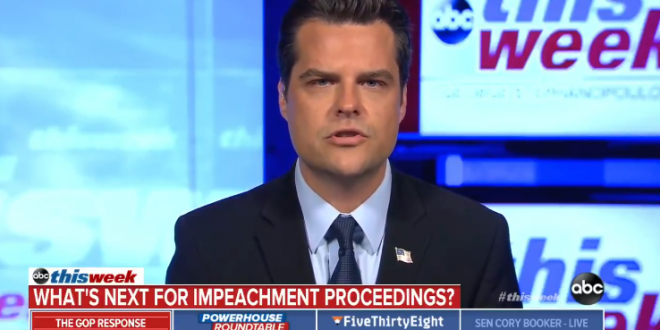 Republican Florida Congressman Matt Gaetz offered several defenses of Rudy Giuliani visiting Ukraine this past week, saying that while it is “weird,” Americans should give him “the benefit of the doubt” because of his role after 9/11. Gaetz appeared on ABC News’ This Week on Sunday to produce a litany of defenses for President Donald Trump and Giuliani’s continued dealings with Ukraine.

Gaetz acknowledged he believes Giuliani is representing the president in the Ukraine as Giuliani continues his reported “dirt-digging” trip in Kyiv, which began on December 4. However, the congressman said the entire impeachment inquiry is null because Trump in his July 25 phone call with Ukraine President Volodymyr Zelensky was simply expressing his “skepticism of foreign aid.”

Republican Florida Rep. Matt Gaetz said President Trump should welcome testimony from top aides in his administration if they have information that could undermine the impeachment push from Democrats.

“I think it would inure to the president’s advantage to have people testify who could exculpate him,” Gaetz said Sunday on ABC’s This Week. “We want to preserve an executive branch where there are out-of-the-box strategy sessions.”

Gaetz, a member of the House Judiciary Committee, warned there could be a chilling effect on presidential administrations if Trump’s top aides are compelled to disclose their private conversations with the president.

.@GStephanopoulos: Can you explain to the American people why you think it’s OK for the president to ask a foreign nation to investigate a political opponent?

Rep. Matt Gaetz says he believes Trump was acting based on a “sincere” skepticism of foreign aid https://t.co/lSQPivZCSF pic.twitter.com/Hyxskedm8m