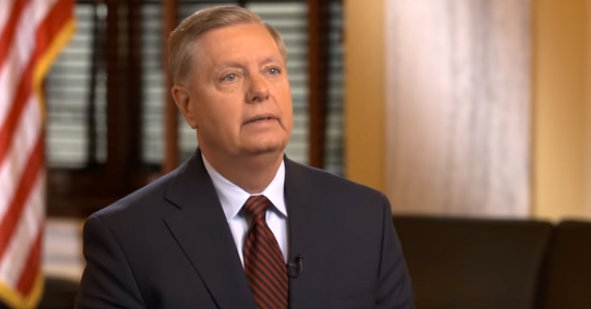 Lindsey Graham Rages: If Pelosi Doesn’t Send Us The Articles, She Is Committing “Constitutional Extortion”

Sen. Lindsey Graham (R-S.C.) on Thursday said that House Democrats would be committing “Constitutional extortion” if they did not allow the Senate to promptly act on approved articles of impeachment against President Trump.

Following the House votes to impeach the president on abuse of power and obstruction of Congress, Speaker Nancy Pelosi (D-Calif.) declined to say when, or even if, the lower chamber would deliver the articles to the Senate.

Some Democrats have urged the Speaker to consider holding the articles as part of an effort to gain concessions, such as additional witnesses and documents, for the trial.

If House Dems refuse to send Articles of Impeachment to the Senate for trial it would be a breathtaking violation of the Constitution, an act of political cowardice, and fundamentally unfair to President @realdonaldTrump.

Not allowing the Senate to act on approved Articles of Impeachment becomes Constitutional extortion and creates chaos for the presidency.

It also sets in motion a tremendous threat to our Constitutional system of checks and balances.

What is driving this crazy idea?

Democrats have finally realized they have a very WEAK case which NEVER should have been brought forward to begin with.

Nancy Pelosi’s threat to refuse to transmit the Articles of Impeachment to the Senate for disposition is an incredibly dumb and dangerous idea.

There is a reason one person can’t be Speaker of the House and Senate Majority Leader at the same time!

Previous Bernie Endorsed By Major Progressive Coalition
Next Trump: Women Complain To Me About Dishwashers