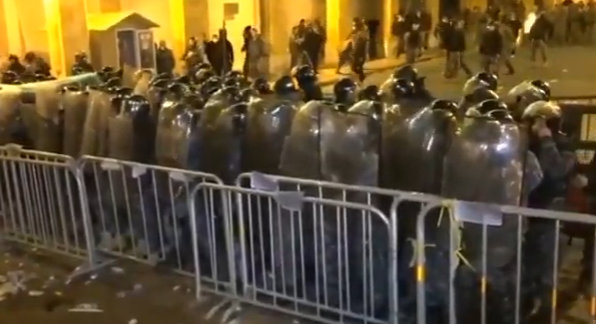 Lebanese security forces fired tear gas, rubber bullets and water cannons Sunday to disperse hundreds of protesters for a second straight day, ending what started as a peaceful rally in defiance of the toughest crackdown on anti-government demonstrations in two months.

The violence comes on the eve of a meeting between the president and parliamentary blocs in which resigned Prime Minister Saad Hariri is widely expected to be renamed to the post. The tension also reflects deepening divisions in the country that is grappling with a severe liquidity and foreign currency crunch.

The violence began as demonstrators, who had been attacked during a sit-in by masked counter-protesters, tried to move into a square near parliament.

The protests have been the largest seen in Lebanon in more than a decade. They have cut across sectarian lines – a rare phenomenon since the devastating 1975-1990 civil war ended – and involved people from all sectors of society.

Lebanon’s prime minister Saad Hariri reached out to the heads of the International Monetary Fund and the World Bank as the impasse puts the country on the precipice of an economic meltdown.

Mr Hariri “expressed to [World Bank president David] Malpass and [IMF Managing Director Kristalina] Georgieva his commitment to prepare an urgent rescue plan to address the crisis, while awaiting the formation of a new government capable of implementing it,” a statement from his office said.

The calls to the organisations came as rating agencies Moody’s and Fitch warned on Thursday of a deterioration in the status of Lebanon’s top banks, which underpin the economic fabric of the country, following instructions by the central bank to reduce interest rates on foreign and local currency deposits.