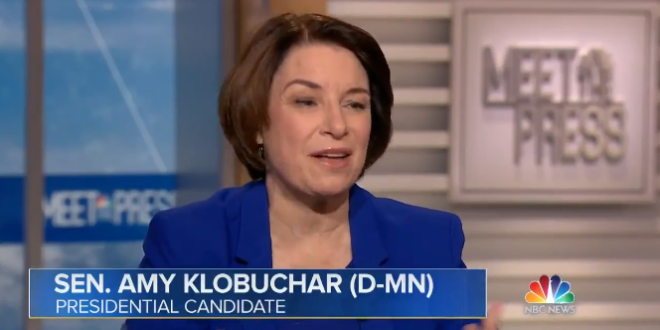 Democratic presidential candidate Amy Klobuchar described President Donald Trump’s behavior as unambiguously impeachable, calling it “a global Watergate” and the textbook behavior of what the Founding Fathers considered worthy of removal from office.

“This is something where the Founding Fathers themselves, James Madison said, the reasons we needed impeachment provisions was that he feared that a president would betray the trust of the American people to a foreign power,” Klobuchar said.  “That is why this is proceeding. I see it simply as a global Watergate.“

Nixon “delegated to some people … to get dirt on a political opponent. That’s basically what this president has done on a global basis.” pic.twitter.com/ZttsFkBirF

There’s one month left in the 2019 session and Mitch McConnell is blocking critical bills.

Americans want progress — we need to win the White House and take back the Senate.

Previous Fox Host: Bad Trump News Only Encourages His Fans
Next DNC Blasts Trump On World AIDS Day: He Is No Ally