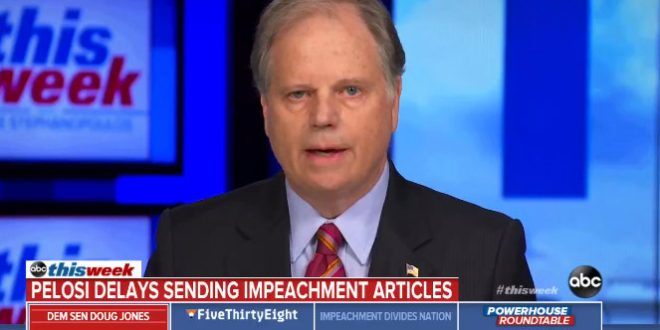 Sen. Doug Jones (D-Ala.) said on ABC’s “This Week” that the allegations that President Trump exploited Ukraine for his political benefit are “serious” and “impeachable,” but added that there are “gaps” in the House’s case and that he is willing to acquit Trump in a Senate trial if “those dots aren’t connected.”

Jones, a vulnerable moderate whose vote will likely play an important role in his 2020 Senate race, is viewed as one of a handful of Democratic senators who could vote against Trump’s conviction.

“(President Trump) ordered his top people who were in the room, who have first hand knowledge, not to testify. He ordered documents not to be turned over,” Sen. Doug Jones says in response to Sen. Ron Johnson’s claim that charges against Trump are “thin.” https://t.co/1HAWEUtQuB pic.twitter.com/alfXVUC4Ff