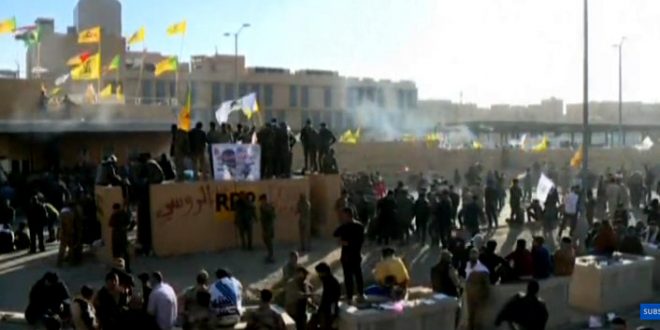 Protesters broke into the heavily guarded compound of the United States Embassy in Baghdad on Tuesday and lit fires inside to express their anger over American airstrikes that killed 24 members of an Iranian-backed militia over the weekend.

Chanting “Death to America!” thousands of protesters and militia members demonstrated outside the embassy compound, throwing rocks, shattering surveillance cameras, covering the walls with graffiti and demanding that the United States withdraw its forces from Iraq.

The American airstrikes on Sunday were in response to an Iraqi militia attack, but they have resulted in the most serious political crisis in years for the United States in Iraq, stoking anti-Americanism and handing an advantage to Iran in its competition for influence in the country.

Iraq has long struggled to balance its ties with the U.S. and Iran, both allies of the Iraqi government. But the government’s angry reaction to the U.S. airstrikes and its apparent decision not to prevent the protesters from reaching the embassy signaled a sharp deterioration of U.S.-Iraq relations.

Iraqi security forces made no effort to stop the protesters as they marched to the heavily-fortified Green Zone after a funeral held for those killed in the U.S. airstrikes, letting them pass through a security checkpoint leading to the area.

The first clip below is live.

Iran killed an American contractor, wounding many. We strongly responded, and always will. Now Iran is orchestrating an attack on the U.S. Embassy in Iraq. They will be held fully responsible. In addition, we expect Iraq to use its forces to protect the Embassy, and so notified!