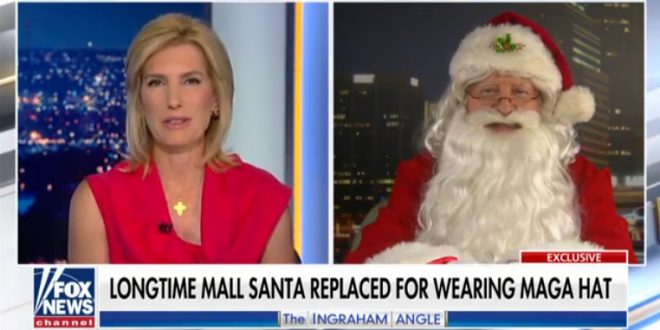 In an exclusive interview Friday, Laura Ingraham spoke with Santa Claus, or the man who portrayed the jolly old fellow in a Waycross, Ga., mall before he was replaced earlier this month for posting a picture of himself in his costume but wearing a pro-Trump “Make America Great Again” hat.

“[The picture] was taken on a whim because I have a lot of Trump supporters that come on my page. And I just thought, for a little bit of humor, to go ahead and have my Trump hat on, dressed while I was in the Santa suit,” Frank Skinner said on “The Ingraham Angle,” while dressed as St. Nick.

Ingraham wants him to sue.

Previous Jeff Flake To GOP Senators: You Will Also Be On Trial
Next GOP State Rep Accused Of Terrorism Won’t Resign: Just Like Trump I’m A Victim Of A Sham Investigation