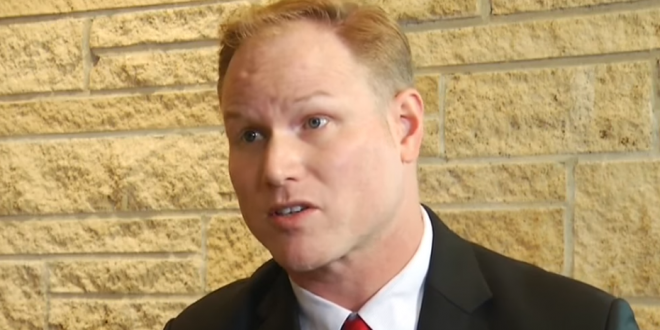 A Kansas congressman is tangled in voter fraud and perjury allegations for what he calls a mistake. It all has to do with U.S. Rep. Steve Watkins and a UPS store in Topeka, Kansas. The Shawnee County district attorney is asking the sheriff’s office to investigate whether Watkins committed fraud.

Watkins is the freshman congressman for much of eastern Kansas, except the Kansas City metro area. Watkins listed 6021 SW 29th St. in Topeka on voting records, casting an advance ballot for November’s Topeka city elections. The address is for a mailbox at a UPS store near 29th Street and Wanamaker Road.

During the 2018 campaign, Watkins was accused of embellishing his biography and business experience. He is expected to run for reelection but he will face a rare primary challenge from fellow conservative Republican Jake LaTurner.

By asserting his place of residence to be the UPS Store, Watkins left the Topeka City Council’s 5th District for the city council’s 8th District. He then cast a November ballot in an 8th District contest decided by 13 votes #ksleg #ks02 https://t.co/w61NIwLdxH

Trying to explain to reporters who don’t cover Kansas Watkins’ residency situation and it’s not easy: Two homes in Alaska, a spouse who lives in Boston and a voter registration at a UPS store in Topeka https://t.co/u3LXVWtqHC

Previous BRITAIN: Tories Call It A “Great Triumph” For Johnson After Trump Leaves Without Fucking Up The Election
Next Felon Rep. Duncan Hunter Won’t Say If He Is Resigning