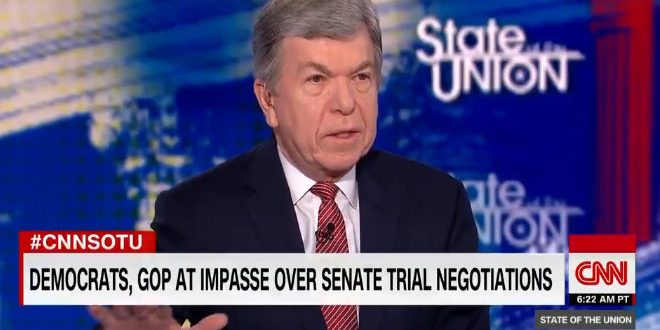 GOP Senator: Pelosi Has No Right To Hold Articles

Sen. Roy Blunt (R-Mo.) said Sunday he does not think Speaker Nancy Pelosi (D-Calif.) has the power to hold the articles of impeachment the House passed last week from the Senate.

“Frankly, I don’t think the speaker has the right to do this,” Blunt said on CNN’s “State of the Union,” in response to Pelosi’s decision not to send the articles to the Senate until Senate leaders agree on parameters for a trial.

“The speaker has a lot of power,” Blunt continued, but once “the House has spoken,” he said he doesn’t think Pelosi has the authority to withhold sending the articles to the upper chamber.

GOP Sen. Roy Blunt on if he will vote to hear from further impeachment witnesses: “Let’s let them present their case and see if we need to hear from witnesses” #CNNSOTU pic.twitter.com/7h4EWtpUtm