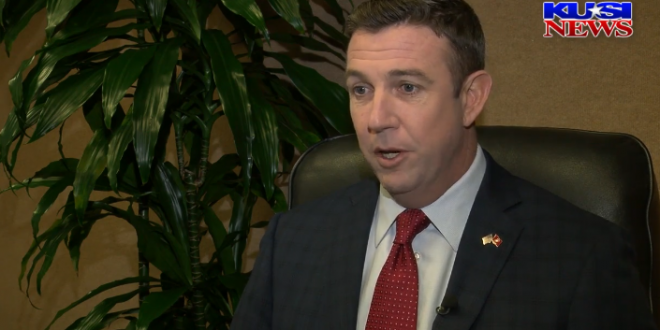 Duncan Hunter “Willing To Take Hit For Whatever My Time In Custody Will Be,” Hopes His District Stays GOP

In an exclusive interview with KUSI’s Steve Bosh, Congressman Duncan D. Hunter announced that he will plead guilty to one count of misuse of campaign funds in Tuesday’s court appearance.  Hunter’s announcement was updated on the U.S. District Court docket Monday morning.

His change of plea hearing is set for December 3, 2019 at 10:00 AM before Judge Thomas J. Whelan. Since the charges were brought against Hunter, several challengers have entered the race for the 50th Congressional District, most of whom are fellow Republicans.

Hunter did not explicitly say he would be stepping down — often an outcome in any such plea agreement — but he answered a question about what would happen to his seat in Congress. “I’m confident that the transition will be a good one,” he told KUSI. “My office is going to remain open. We’re going to pass it off to whoever takes this seat next. I think it’s important to keep the seat a Republican seat.”

Margaret Hunter, 44, changed her plea in June to guilty to a single count of conspiracy and agreed to testify against her husband. She faces up to five years in prison when she is sentenced in April, but is likely to serve substantially less time. As for Hunter, he told KUSI, “Whatever my time in custody will be, I will take that hit. My only hope is that the judge does not sentence my wife to jail. I think my kids need a mom in the home.”

In an exclusive #KUSINews interview, Congressman Duncan D. Hunter says his “only hope is that the judge does not sentence my wife to jail.”@Rep_Hunter‘s change of plea hearing will be before Judge Thomas J. Whelan on December 3, 2019.

#KUSINews Exclusive: Congressman Duncan D. Hunter (@Rep_Hunter) announces that he will plead guilty to one count of misuse of campaign funds.