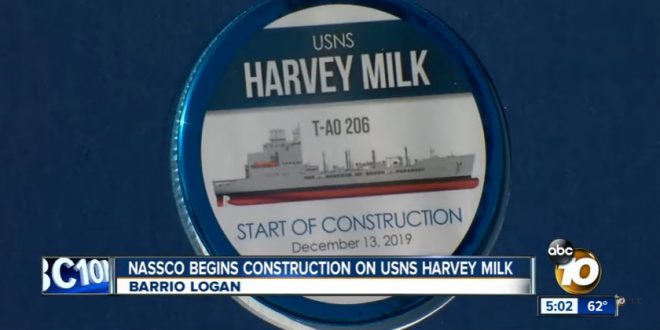 Construction began Friday on the future Harvey Milk, a fleet oiler named for the slain gay rights leader and the first openly gay man elected in the state. Milk was elected to the San Francisco board of supervisors in 1978 and was assassinated 10 months later by an ex-supervisor. His life was the subject of the 2008 film “Milk.”

Almost 30 years before his election, Milk was a Naval dive officer based in San Diego. His nephew, Stuart Milk, attended Friday’s event and said naming the ship after his uncle sends a message to people around the world. “(This) sends a global message of inclusion more powerful than simply ‘We’ll tolerate everyone,’” Milk said. “(It says) We celebrate everyone.”