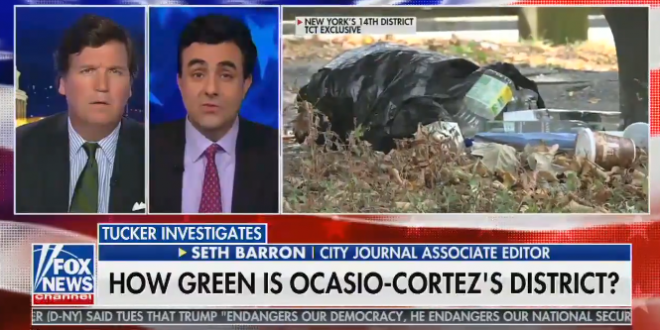 Carlson Guest: AOC’s District Is Filthy Because It’s One Of The “Least American” Areas Of The Country [VIDEO]

“Her district is actually one of the least American districts in the country. Now by that, I don’t mean that it’s not part of America, but it’s occupied by relatively few American citizens. A very high percentage of her district is, in fact, illegal aliens.

“Now, the way they inhabit housing there is such that they live in a lot of illegal spaces, like basements and many people live there. So they wind up producing a lot of garbage that the landlords don’t want thrown out normally.

“So hence, you wind up with a lot of garbage on the streets, you have illegal food vendors pouring their pig grease into the gutters. I mean I worked out there, it can be a little gross.” – Seth Barron, editor for the right wing City Journal, on Tucker Carlson’s show.

Tucker Carlson guest says that @AOC‘s district is dirty and the reason it’s so dirty is bc it’s “one of the least American districts in the country … it is occupied by relatively few American citizens” pic.twitter.com/OOn6aiMt7L

A lot of people have asked where I got my data regarding the relatively large non-citizen population of AOC’s district. Here it is: https://t.co/dHTewDrETY

This is what White supremacy looks like in 2019: Tucker Carlson Guest Smears AOC’s NY District: It’s Filthy Because It’s ‘One of the Least American’ in the Country https://t.co/edT4uXpT9p via @mediaite

This guest is Seth Barron, an extremely strange man who once got angry that New York City would provide free tampons to high school students because he thought students would hoard them https://t.co/abKIPUY2HB