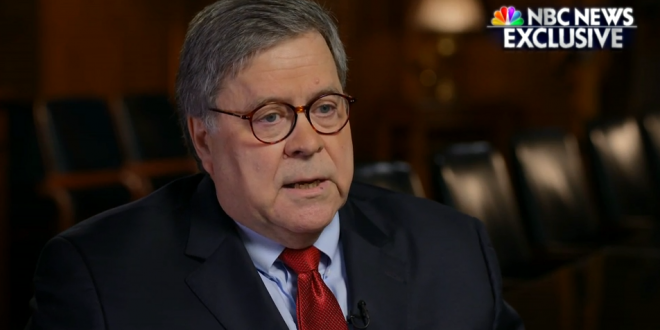 Attorney General William Barr said he still believes the FBI may have operated out of “bad faith” when it investigated whether the Trump campaign colluded with Russia, and he contends the FBI acted improperly by continuing the investigation after Donald Trump took office.

In an exclusive interview with NBC News, Barr essentially dismissed the findings of the Justice Department’s inspector general that there was no evidence of political bias in the launching of the Russia probe, saying that his hand-picked prosecutor, John Durham, will have the last word on the matter.

“I think our nation was turned on its head for three years based on a completely bogus narrative that was largely fanned and hyped by a completely irresponsible press,” Barr said. “I think there were gross abuses …and inexplicable behavior that is intolerable in the FBI.”

Bill Barr condemns Russia investigation as “completely bogus narrative that was largely fanned and hyped by an irresponsible press” pic.twitter.com/UkZvQZKFdI