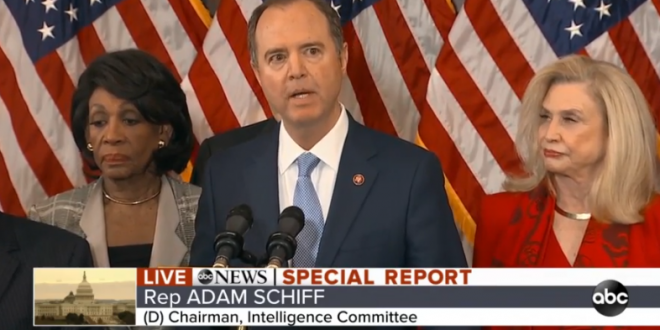 House Democrats unveiled two articles of impeachment Tuesday against President Donald Trump — abuse of power and obstruction of Congress — pushing toward historic votes as the president insists he did “NOTHING” wrong. Speaker Nancy Pelosi said ahead of the morning announcement that Trump tried to “corrupt our upcoming elections” and remains a “threat to our democracy and national security.” Pelosi said in a tweet that the House was taking next steps to “defend’ the democracy.”

“President Trump’s persistent and continuing effort to coerce a foreign country to help him cheat to win an election is a clear and present danger to our free and fair elections and to our national security,” said Dan Goldman, the director of investigations at the House Intelligence Committee, presenting the finding of the panel’s 300-page report of the inquiry. From the White House, Trump tweeted repeatedly, assailing the “Witch Hunt!” and “Do Nothing Democrats.”

“We stand here today because the president’s continuing abuse of his power has left us no choice. To do nothing would make ourselves complicit in the president’s abuse of his high office, the public trust, and our national security.” —@RepAdamSchiff pic.twitter.com/HdoCOuxAx0