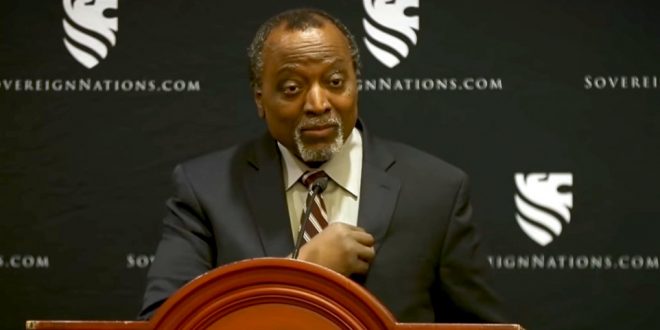 As I reported a few months ago, the FDA has issued a warning against the so-called Church of Bleach:

The U.S. Food and Drug Administration is warning consumers not to purchase or drink a product sold online as a medical treatment due to a recent rise in reported health issues. Since 2010, the FDA has warned consumers about the dangers of Miracle or Master Mineral Solution, Miracle Mineral Supplement, MMS, Chlorine Dioxide (CD) Protocol, and other similar products.

Miracle Mineral Solution has not been approved by the FDA for any use, but these products continue to be promoted on social media as a remedy for treating autism, cancer, HIV/AIDS, hepatitis and flu, among other conditions. However, the solution, when mixed, develops into a dangerous bleach which has caused serious and potentially life-threatening side effects.

A new addition to the Facebook-fueled movement is IAMtv, a conservative web-based channel fronted by Alan Keyes, former diplomat and adviser to President Ronald Reagan who appears in pro-MMS broadcasts with bottles of MMS from a dubious bleach “church” featured prominently on his desk. IAMtv figures even claim Keyes is helping the network spread its mission from Uganda to the halls of power in the U.S..

“I get to use my ‘I work with Alan Keyes,’” Sisson said, miming a fishing rod as he pretended to reel someone in with Keyes’ name. “Which is sorta cool because I met [Christian personality] Ken Ham a week ago; I met the governor of Kentucky, Matt Bevin, a super guy; met Gov. Bill Lee here in Tennessee. “Gonna meet Trump, it’s only a matter of time. President Trump’s gonna invite us up there, when he finds out about this stuff,” Sisson added.

Alan Keyes last appeared on JMG in 2017 when he and fellow anti-LGBT crackpot Flip Benham took turns screaming at reporters outside a Roy Moore press conference.

In 2016, he and NOM president Brian Brown participated in an anti-LGBT rally staged by the red-caped Catholic loons outside the White House.

In 2015, he declared that Dylann Roof’s massacre at a Charleston church was an act of pro-gay terrorism.

Also in 2015, he declared that a SCOTUS ruling for same-sex marriage would give Christians “just cause for civil war.”

Also in 2013, he joined Larry Klayman’s rally outside the White House and called for overthrowing Obama.

In 2012, the Supreme Court rejected his lawsuit in which claimed that Obama faked his Hawaii birth certificate.

And now’s he drinking bleach. Allegedly.

Previous Los Angeles Times: We’ve Seen Enough, Impeach Him
Next SURVEY: 46% Of US Military Households Now Consider Russia An Ally Thanks To Trump, Pentagon Is Worried