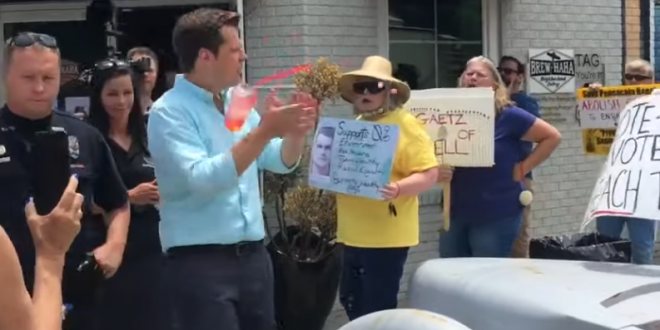 Woman Who Threw Drink On Matt Gaetz Gets 15 Days

Amanda Kondrat’yev, the woman who threw a red slushie drink on U.S. Rep. Matt Gaetz at a campaign event in June, was sentenced Monday to 15 days in prison for assaulting a U.S. congressman.

The 35-year-old wife and mother of two, who briefly ran against Gaetz as a Democratic challenger in the 2016 election, will turn herself in to the U.S. Marshals to begin her sentence Dec. 2. Kondrat’yev pleaded guilty in August and admitted to throwing the cup at Gaetz as he was leaving the Brew Ha Ha restaurant for an “Open Gaetz” event on June 1.

Sentencing guidelines called for a prison sentence of eight months to a year, but U.S. Magistrate Judge Hope Cannon said the fact that Kondrat’yev had no prior criminal history and that the crime in question had a “limited duration” justified a departure from those guidelines.

My statement in response to Amanda Kondrat’yev being sentenced to 15 days in jail and one year of probation: pic.twitter.com/RG8BuGWK40