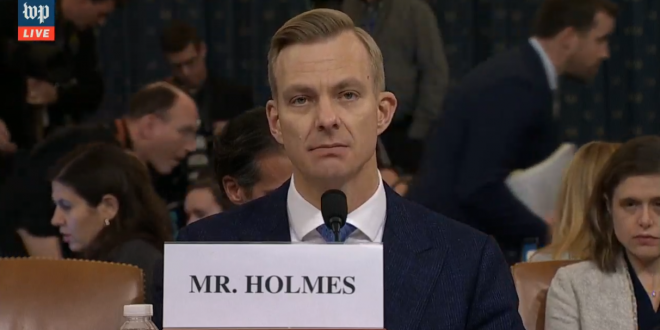 David Holmes, a State Department official detailed as a political counselor at the U.S. embassy in Kyiv, testified that former national security adviser John Bolton said during a meeting in August that the hold on military aid to Ukraine wouldn’t be lifted unless Ukrainian President Volodymyr Zelensky was able to “favorably impress” President Trump.

The revelation suggests that Bolton, who has so far refused to testify in the impeachment inquiry, knew that Trump was using the aid as a stick rather than withholding it as part of a routine review process as some Trump allies have claimed. Bolton, through a spokeswoman, declined to comment on Thursday’s testimony.

Holmes also testified that his “clear impression” was that the freeze on the military aid was meant by the president either “as an expression of dissatisfaction that the Ukrainians had not yet agreed to the Burisma/Biden investigation or as an effort to increase the pressure on them to do so.”