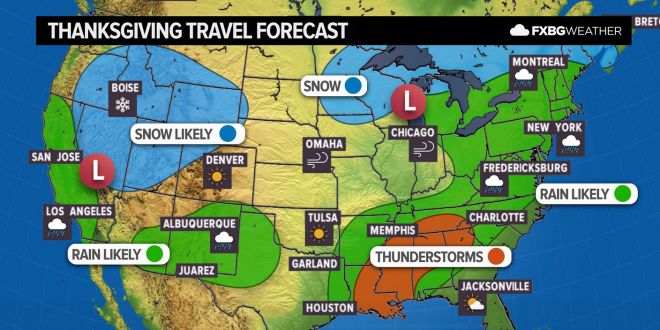 Millions of Thanksgiving travelers in the US will get walloped this week by several storms, including a dangerous system threatening parts of the West Coast.

From California to Michigan, more than 20 million people are under winter weather advisories, watches or warnings, CNN meteorologist Dave Hennen said. And we’re still 26 days from the official start of winter.

A “historic” storm is heading towards southwest Oregon and northwest California Tuesday and Wednesday, the National Weather Service said. The storm is forecast to rival the strength of a Category 1 hurricane and pack wind gusts up to 74 mph –, CNN meteorologist Judson Jones said.

The Minneapolis-St. Paul metropolitan area could see its biggest November snowfall in nearly a decade, and travel is northwestern Wisconsin “is going to be chaotic,” said National Weather Service meteorologist Brent Hewett.

The Minneapolis airport could be hit, but Chicago, with its two big airports, should only see rain from the storm, weather service officials said.

The second storm, brewing in the Pacific, was expected to hit the West Coast on Tuesday afternoon or evening, bringing snow to the mountains and wind and rain along the coasts of California and Oregon.

The snow is officially falling ❄️ As of now, 453 flights have been cancelled in and out of DEN tomorrow. Before you head to the airport, make sure to check your flight status with your airline. Safe travels! ✈️ #cowx pic.twitter.com/guZNpLjfTy

Watch @CBSDenver special coverage of this storm thru 9am. Our biggest snow storm in three years – most of us have a foot of snow or more. Blizzard warning to the east, with interstates closed. Hundreds of flights cancelled. Schools and businesses shut down. #4wx pic.twitter.com/uRw6zNd4SX