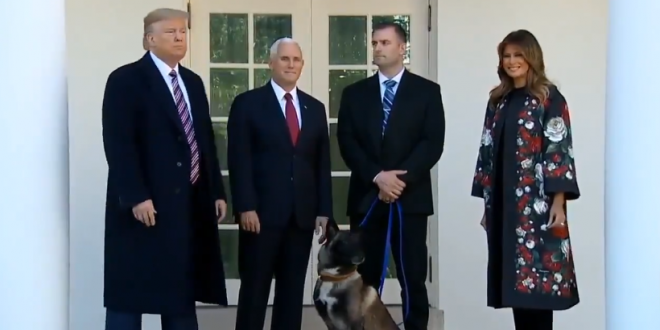 A White House official on Monday said that Conan, the military working dog that helped take down ISIS leader Abu Bakr al-Baghdadi in northwest Syria in October, was a female. However, a few hours later, a White House official said the dog was in fact a male, adding to a debate that developed after President Donald Trump tweeted a photo of the dog after the raid.

Trump, who referred to the dog with male pronouns several times, said he thought it was a good idea to “put a muzzle on the dog” because of its “violent” tendencies, though it was unmuzzled throughout the ceremony. The president’s remarks did not deter Pence, who petted Conan several times on her head. But former military dog handlers and canine experts were still at an impasse, with some intensely examining the photo.

Working for more clarity on the matter.

So Apparently There’s Some Confusion About Conan the Hero Dog’s Gender https://t.co/wQbqnhR3KK

Update: Conan is back to being a male, per White House aides via @hunterw. Apparently there was confusion.

Watch how Trump continually keeps his distance from Conan the dog while Pence is perfectly comfortable next to him. pic.twitter.com/N8IJNGLj6r