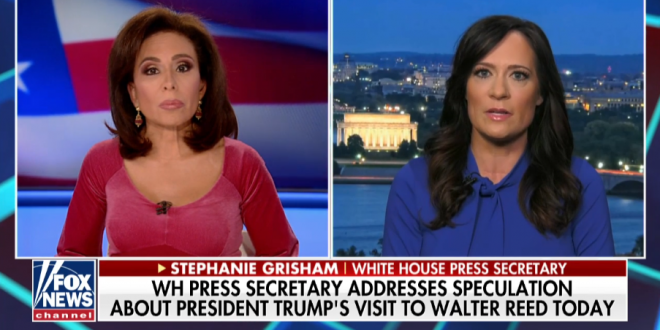 White House And Cultist Jeanine Pirro Agree: Trump’s Health Is “As Good As Can Be, Almost Superhuman”

“He’s healthy as can be,” Stephan ie Grisham said. “I put a statement out about that. He has got more energy than anybody in the White House. That man works from 6:00 a.m. until, you know, very, very late at night. He’s doing just fine.”

“The President remains healthy and energetic without complaints, as demonstrated by his repeated vigorous rally performances in front of thousands of Americans several times a week,” Grisham said in her statement released earlier Saturday night following the unannounced visit to the medical center.

“He’s almost superhuman,” Jeanine Pirro said, agreeing. “I don’t know how anyone can deal with what he’s dealing with. I get frustrated with what’s going on in Washington.”