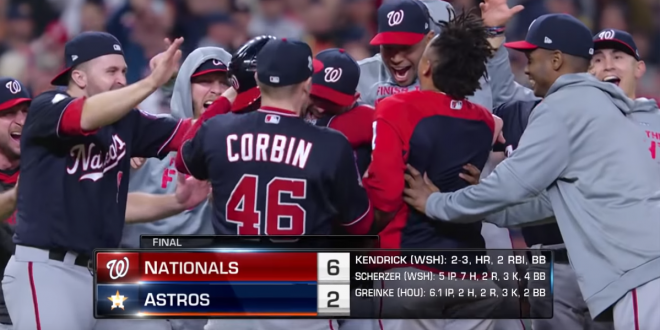 The Washington Nationals, who will have a parade to celebrate their World Series title Saturday, will visit President Donald Trump at the White House on Monday, according to a White House official. A ceremony for the Nationals will be held on the South Lawn at 1:15 p.m. ET, the official said.

Trump had attended Game 5 on Sunday. He was largely met with boos by the Nationals Park crowd when he was shown on the video screen. The Nationals’ parade Saturday will begin at 2 p.m. ET, starting near the Washington Monument and ending near the U.S. Capitol.

Some African-American athletes have opted out of White House visits after their team has won a title. And a number of entire teams have declined invitations. There’s the 2016-2017 NCAA Champion University of North Carolina men’s hoops team. The same year, the University of South Carolina women’s championship basketball team did the same. The NBA champion Golden State Warriors also skipped that year, Trump’s first in office, with Trump feuding on Twitter with star guard Stephen Curry.

Also in 2017, the president disinvited the NFL champion Philadelphia Eagles amid reports that all but a small handful of players would boycott the visit after rejecting his call for all athletes to stand during the national anthem. The 2017 World Series Champion Houston Astros did go. But star players Carlos Correa and Carlos Beltran skipped over Trump’s immigration and other policies. Superstar second baseman José Altuve did attend, but glared at the president while standing directly behind him.

Previous Evangelicals Shush Trump’s Accusers In Jesus’ Name: They Shall Be As Silent As The Finger Of God’s Justice
Next HHS Seeks To Drop LGBT Protections In All Programs