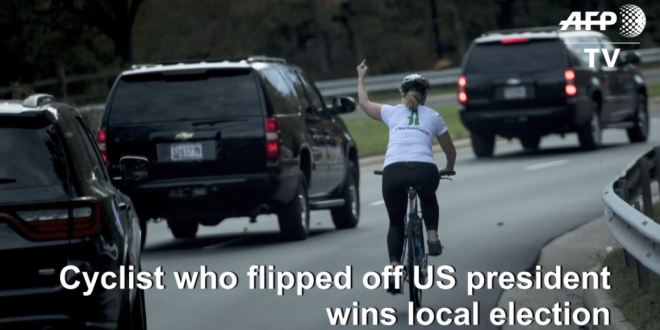 A legion of reasons propel political neophytes to run for office, but none may be as unusual as what inspired Juli Briskman, the cyclist who gave President Trump the finger two years ago and found herself without a job and at the center of a national uproar.

On Tuesday, Briskman got a new job, winning a seat on the Loudoun County Board of Supervisors — ousting a Republican in the process. “It’s feeling fantastic, it’s feeling surreal,” Briskman, 52, a Democrat, said by telephone as she celebrated her victory. “The last two years have been quite a ride. Now we’re helping to flip Loudoun blue.”

As it turns out, Briskman’s district includes a certain golf course owned by a certain president. “Isn’t that sweet justice?” she asked, her cackle suggesting that she knew the answer to her own question.

UNRELATED: As you may recall, Eugene “Long-haired Men In Warehouses” Delguadio once served on the Loudoun County Board of Supervisors.